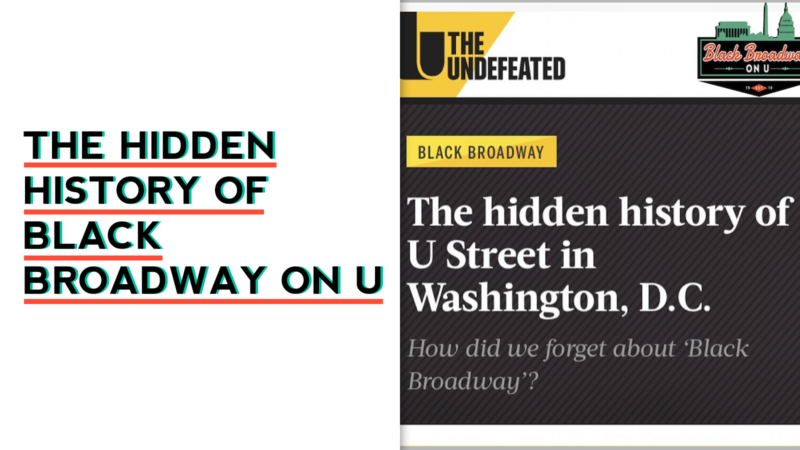 ESPN The Undefeated: Remembering U Street/”Black Broadway on U”

Washington, DC – Wednesday, March 1, 2017 – Driving down the U Street corridor in 2013, D.C. native/multimedia producer, Shellée M. Haynesworth got the inspiration to begin her “Black Broadway on U: A Transmedia Project.” Sure, driving down the road that would become the focus of her 2014 series provided plenty of ideas, but Haynesworth, a multi-generation Washingtonian, was actually pushed to start the work by her 96-year-old grandmother, Lucille Dawson, who joined her in the car.

Dawson migrated from Louisiana in July 1932 and moved to U Street with her brother. As Haynesworth and her grandmother made their way down the road, the matriarch began to point out where and how things had been, while Haynesworth noticed how everything she said was in past tense — none of these fantastic pieces of “Black Broadway” were there anymore.

Black Broadway: The hidden history of U Street in Washington, D.C.
How did we forget about ‘Black Broadway’? by Rhiannon Walker, associate editor, The Undefeated, READ THE ENTIRE STORY, HERE.